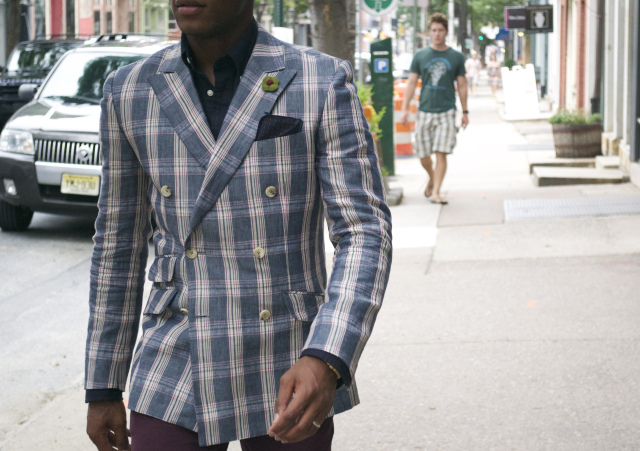 In continuing with the Bold Blazer Series from last summer, behold the custom linen, plaid, Derby blazer by Indochino. When you head to the Indochino site, you will see that this blazer is shown as single-breasted, two button option. In the customization process, you can change those features to resemble the one in this feature, if you like (you have this option on all suits and blazers too). Some of you might consider this blazer geezer chic, Caddy Shack sharp or even “Right Blazer, Wrong Decade”, but, some of you might consider this blazer stylish as hell. You can even call this your “Go To Hell Blazer” (for the nay-sayers). For the adventurous type, this blazer is one to add to your warm weather wardrobe. Not to say that the not so stylishly adventurous couldn’t rock this blazer, but, it takes a bit of balls to fully commit to it.

There are a fair amount of things to considered when pairing such a bold pattern blazer with an outfit: Unless the wedding you’re attending this summer specifies “black-tie attire”, this look will really set you apart from the crowd. One things you never want to do is look like you’re one of the groomsmen or match the groom, so steer clear of the seersucker (more than likely either the groom or his boys will be wearing it). This look works well as a garden party option too.

Reason Behind Styling This Look: Reasoning Behind Styling This Look: Reason Behind Styling This Look:

Be sure to visit www.Indochino.com to create some custom pieces for yourself. Also, you can follow them on Twitter @Indochino.