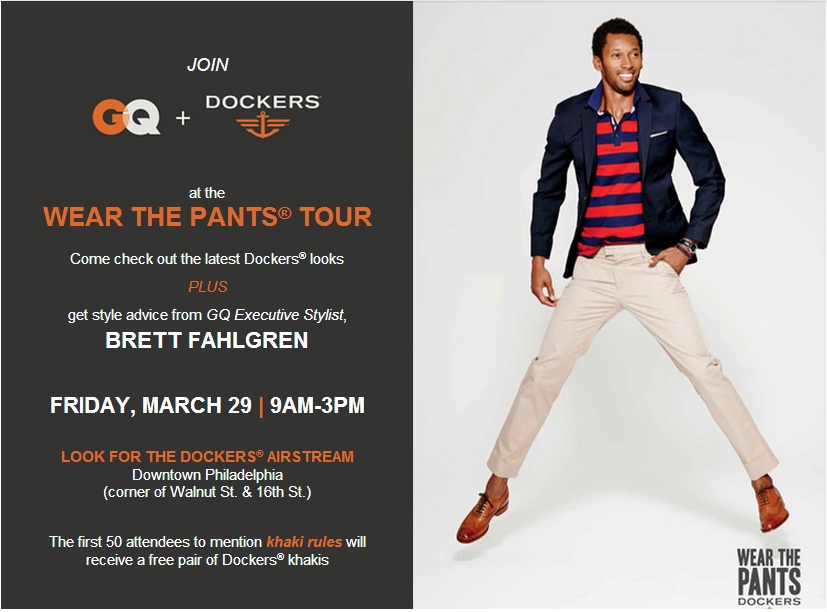 (all text in burgundy & photos are clickable)

The purveyors of the ultimate khaki pant, Dockers® and GQ Magazine’s executive stylist Brett Fahlgren, will be making a trip to Philly this upcoming weekend on the first stop of the WEAR THE PANTS® Tour. The dates and times of the event are Friday, March 29th from 9am to 3pm and Saturday 12pm to 7pm. Be on the lookout for the tricked-out, Dockers® Airstream trailer that will be stationed at 16th & Walnut Street in Center City Philly.

Get valuable style advice from Brett, as well as, Philadelphia-based fashion stylist Bridget Marowski during the Friday session. The Dockers® Airstream will be stocked with a variety of styles, colors and fits of their beloved khakis ranging from the Alpha Khakis to the Dockers® Signature Khakis. As an added bonus, each day the first 50 attendees that mention “KHAKI Rules” will receive a pair of free khaki! You can’t beat great style advice and a pair of free Dockers® khaki. No need to pre-register for this event because it’s open to the public. Show up, get styled and walk away with some great pants. Follow @Dockers on Twitter and search #WearThePants starting this Friday!

Below are pictures by Paul + Willam for Dockers®.

See you on Friday and get some dope khakis from @Dockers®. Keep up with the WEAR THE PANTS Tour by checking out their Facebook Page.