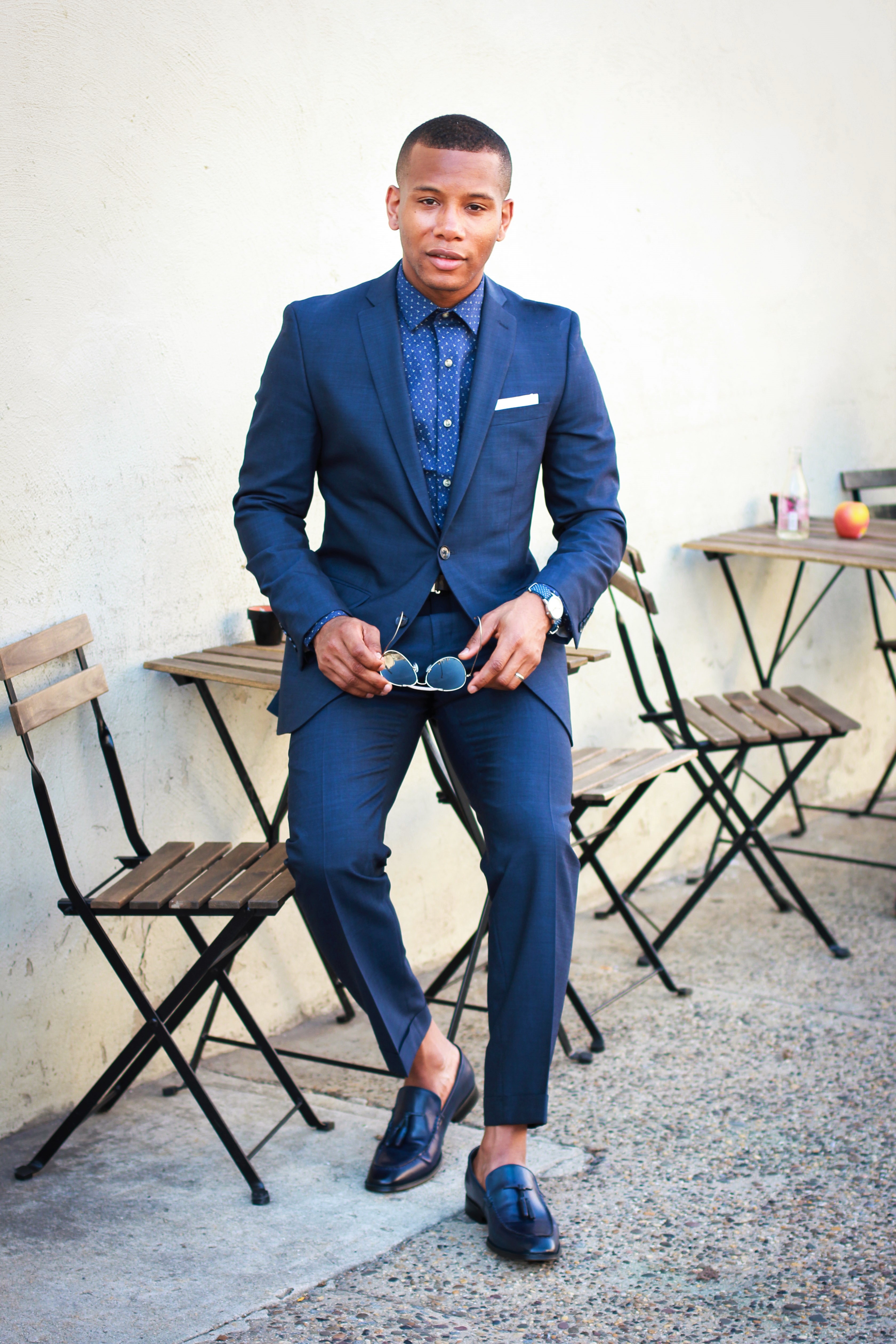 You’ve graduated from college and you’re now ready to enter the workforce. Hopefully, you’re excited to start your professional career, however; you want to make sure you look the part and suit up responsibly. You might not have a ton of cash, so you’ll want to get a suit that you’ll get tons of mileage out of until you can add more to your wardrobe.

In this installment of my #SettingTheBar series with Bar III for Macy’s, I’ll show you how to rock their Midnight Blue Suit 5 ways to get through workwear – and nobody will notice that it’s the same suit!

Classic Americana With A Twist Power Mondays! Kicking off the work week can be tough, especially after a relaxing weekend. The best way to attack the week is to suit up with a strong sartorial combination that mixes classic American menswear like a navy & red rep tie with a dark blue suit. Depending on your work environment you’ll be able to add subtle style twists like a grey these grey shoes to show off your flair for what can be considered the whimsy of menswear.

You’re not trying to reinvent the wheel with this combination. The red & midnight blue color palette is classic and undisturbed, however; adding a grey wingtip is the wild card. What that means is that the rest of the look should remain simple making your footwear the quiet standout of this look. Three-pieces suiting is usually reserved for the big boss and we’re sure you have just made it yet. But, you know what they say – dress for the job you want! Not to ruffle any feathers, by adding an oversize checked pattern shirt you’ll give off an air of suave boss in training.

You can never go wrong with a brown & blue color combo. Look closely at the shirt – the brown is a warm tone that perfect for the spring and complements the right midnight blue suit. Instead of pairing a deep brown shoe with this look, the tan monkstrap adds to the warm tones of this three-piece kit. It’s sometimes great to give your suit jacket a rest and put your vest center stage. This is a sure fire way of getting the most out of your suit and everyone will think you put together a whole new wardrobe. As the weather heats up, this vested look might become your go-to because it will keep you cool and you’re still just a polished as everyone else in the office.

You can never go wrong with a crisp white shirt. It’s the perfect blank canvas for any tie & suit combo. This time, instead going for a tie with some punch, pairing a subdued complement color palette like grey & navy stripes refines the look while adding enough attitude. Adding a fresh plaid tie is one of the easiest ways change up the way your suit looks. During the spring, light and rich colors like brown and deep yellow will pop against dark blues with yellow “hey I’m a plaid tie”. Keep the rest of this look simple. Instead of opting for a white shirt, reach for a light blue Oxford because it soften the colors of the tie and the contrast between colors won’t be so severe.

Looking closely at this plaid tie you’ll notice that there is a base color of midnight blue – making it an easy complement to the midnight blue suit. There’s a familiar fun in this plaid pattern that isn’t novel but offer a refined cheekiness. You made it to Friday and you’re thinking about what you’re doing after work! So let’s close those Excel sheets and get out of the office. In many work places the dress code is a bit more relaxed on the weekend, but, you still want to be work appropriate. A monochromatic look featuring a small scale pattern shirt is the perfect transition from the office to an after work night out.

Besides being monochromatic, the look is extremely tailored. The subtle pattern adds some fun to this outfit without learning too far in the “party” direction. For a bit of added depth & dimension, it helps that this shirt is a slightly lighter blue than the suit – which saves you from giving off a uniform vibe.

Feeling Inspired? Are You Ready For A Midnight Blue Suit Upgrade? Head over to Macys.com and check out Bar III. This post is sponsored by Macy’s & Bar III for the #SettingTheBar campaign. All thoughts and styling are that of Men’s Style Pro.