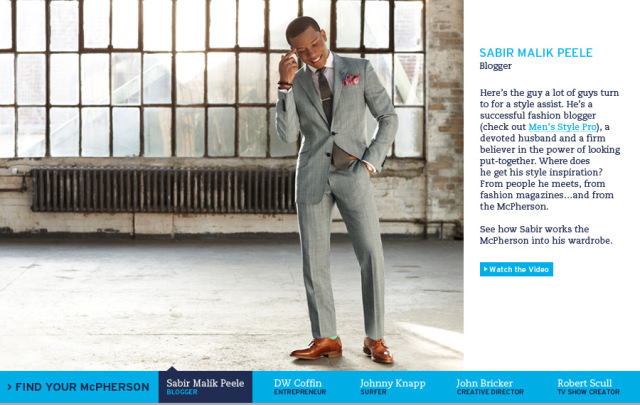 It is a great honor to announce that I am featured in Johnston & Murphy’s “McPherson Men” campaign. As you can see from the campaign, I am one of five guys selected to show how we style the McPherson shoe into our wardrobe. The concept of this particular campaign was to bring together five guys from different walks of life and have them show you how the McPherson shoe influences their style and to give you better insight to what style means to them. I am the owner of two pair of shoes from the McPherson line. The post I did a few weeks ago titled, “Go Buck Yourself“, features the off white wingtip Italian suede McPherson’s and for the campaign I chose the leather captoe McPhersons. There are two things that stand out to me about the McPherson shoe that I absolutely love. The craftsmanship and fit of the shoes are impeccable. Johnston & Murphy are known for making shoes with a high comfort level and the McPherson shoe bring high comfort and amazing style. Below is the video from the campaign which was directed by Carter Peabody of Peabody & Co.

[youtube http://www.youtube.com/watch?v=IfGBmQsyapk] Special thanks to Johnston & Murphy for selecting me to be apart of this project. A huge thanks to Carter Peabody and the entire crew that worked tirelessly to make this project in to masterpiece.